The Importance of Habituation and Sensitization

In the process of learning, having a repeated presentation of a stimulus can change behavior. There are two mechanisms used in learning known as habituation and sensitization.

Habituation is the decrease in the strength of an elicited behavior which is followed by a  repeated presentation of the eliciting stimulus. An example of habituation would be a student reading in a library, tuning out background noises like page flipping, whispering, but once their friend arrives, the unexpected stimulus can elicit a response from that student!

Sensitization would be the opposite. Instead, it is the increase of strength in the behavior followed by repeating measures of the stimulus. An example of sensitization would be most relevant in trauma survivors. For instance, a veteran with experience in weaponry and bombs, would react negatively to fireworks, as it triggers the same fear and environment.

These mechanisms are incredibly important functions! Habituation is key as it helps us decrease our response to repeated stimulus. Habituation allows us to tune out irrelevant stimuli in order to respond to important stimuli. The same goes for sensitization. Sensitization is important as it allows to become aware and alert. 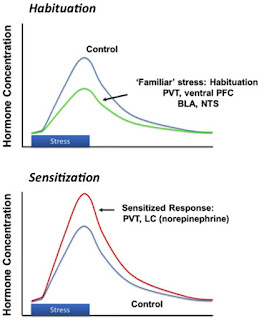