Incentive Value is attractiveness of an incentive based on objective properties such as a number or amount. An example of this would be having a certain number of things that you like and that you need to have in your daily life. I feel as though this could be something that is good and something that could also be bad. Sometimes people don't know they're limit and just keep going to buy these items and collecting them. 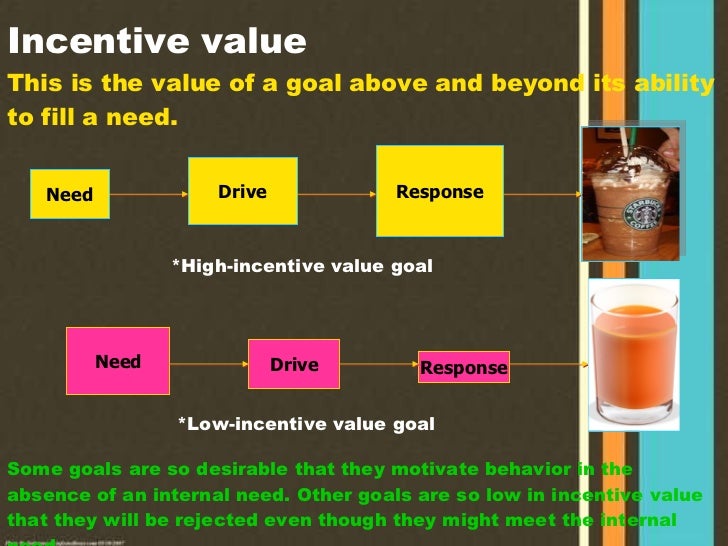 Posted by Megan Sweeney at 3:19 PM No comments:

"Addiction is a brain disorder characterized by compulsive engagement in rewarding stimuli despite adverse consequences (SAMHSA). With this being said, there are many different characteristics of addiction such as craving, seeking out, and use of a particular drug. Some of the other characteristics are voluntary drug use results in either quitting, using occasionally, or compulsive involuntary use. "Finding an effective approach for treatment can mean investigating different doctors or programs before finding a good match" (end addiction). It is so important to know that if you are fighting addiction then you are not alone. There are so many ways that you can get yourself help, you just need to talk to someone and get the help that you need. Posted by Megan Sweeney at 2:55 PM No comments:

I believe that self control is a very important thing to have. Self control is known as "an aspect of inhibitory control, is the ability to regulate one's emotions, thoughts, and behavior in the face of temptations and impulses. A related concept in psychology is emotional self-regulation. Self control is thought to be like a muscle" (Wiki). An example of self control would be when you see that only one cookie is left and you use your willpower to not eat it because you know that the cookie isn't good for you. Personally, I feel that there are a lot of people in this world that don't have self control. For example, my one friend doesn't have any self control because she just keeps eating and eating and has no idea when to stop.

Posted by Megan Sweeney at 2:23 PM No comments:

The premack principle is based on the notion that reinforcers can be viewed as behaviors rather than stimuli. This principle states that high probability behavior can be used to reinforce a low probability behavior. For example, if you are hungry you are more likely to eat than work out. In this situation, eating food can be used to reinforce the target behavior of exercising. This video provides further examples of when the premack principle can be applied.
https://www.youtube.com/watch?v=LjjGSY_T9ss
Posted by Jacqueline Francisco at 8:19 PM No comments:

Reciprocal determinism is the assumption that environmental events, observable behavior, and person variables reciprocally influence each other. This term was created by Bandura and according to him, how we think can influence our environment- through environments we are in and how we perceive them. Reciprocal determinism stimulated the development of cognitive- behavior therapy. This therapy treats psychological disorders by altering environmental variables and cognitive processes. Cognitive-behavior therapy can be used to help individuals with disorders such as anxiety and depression. The attached video explains this evidence based therapy it great detail.
https://www.youtube.com/watch?v=q6aAQgXauQw
Posted by Jacqueline Francisco at 7:20 PM No comments:

Something I found very interesting in this textbook was language and the abilities that animals have when it comes to language. specifically, the experiment with American sign language and chimps is what intrigued me the most. although they did not fully grasp the concept of sign language, they still were able to use what was trying to be taught to them to ask for food meaning they understood at least some of what was being taught to them. after reading about this I decided to look up videos and was very impressed with how smart these animals can be.

Sign tracking is displayed when an organism approaches a stimulus that signals the presentation of an appetite event. In 1941, Pavlov reported that during a classical conditioning experiment one of his dogs approached and licked the light that signaled when food was going to be delivered. Not much attention was paid to this occurrence until recently. Sign tracking is referred to as an instance in which classical and operant conditioning overlap. In this video, raccoons in a study with placing poker chips in slots exhibit sign tracking.
https://www.youtube.com/watch?v=D52sQJEQI0Y
Posted by Jacqueline Francisco at 5:50 PM No comments:

Reading through this chapter I have learned that there is a two process theory that goes along with avoidance. Just through reading the chapter I was able to determine that avoidance behavior is basically when people run away from they’re problems and try to avoid it. In all honesty I am able to say I have done this before. One time I ran into a problem that I was personally scared to own up to and instead I avoided it for a couple of days. After doing that, I have honestly learned my lesson to always own up to what you do and never avoid your problems because they will only get worse. Punishment I have learned is being punished for something that you have done that isn’t correct. For example, if you break the law and steal something then as a punishment and a lesson you would spend sometime in jail.
Posted by Megan Sweeney at 5:21 PM No comments:

Theory of mind is an important social-cognitive skill that involves the ability to think about mental states, both your own as well as others. Developing this skill gives us the ability to understand that other individuals thoughts and beliefs may be different from your own and consider the factors that have led them to the mental state that they’re in. We evolve skills that help us attribute mental states, including emotions, desires, beliefs, and knowledge.

In order to interact with others, it is important to be able to apply your existing knowledge to your current situation. Along with having the capability to connect what's going on in someone else's head to infer their intentions which influence their actions. This includes hopes, fears, beliefs, and expectations. Some social interactions can be more complex than others which can lead to misunderstandings, but once you have a firm grip on your bearings then you are able to respond accordingly. This part of a child’s developmental process is vital.

Theory of mind can be enhanced by opportunities such as:

Posted by Hannah Pierce at 4:38 PM No comments:

A fixed action pattern is an instinctive activity pattern that causes animals to act in a specific behavior sequence that is unique to their species. It is a pattern that is relatively unchanging within species and normally plays itself out to completion even if interrupted. These action patterns are produced by a mechanism that is called an innate releasing mechanism which is produced within a neural network. Examples of this include ducks flying in a v pattern, squirrels that bury nuts, and spiders making webs.
Posted by Morgan M. at 4:06 PM No comments:

Simply put, dishabituation is the way we respond to an old stimulus as if it were new again. When we repeatedly experience a stimulus, we eventually get used to it, and stop responding the same way we did when we first encountered it. We become habituated to it and stop paying attention until we are given a new stimulus.Then when we are once again given the original stimulus, we respond to it with a renewed interest. The previous habituation to it has been reversed.
Posted by Morgan M. at 3:52 PM No comments: 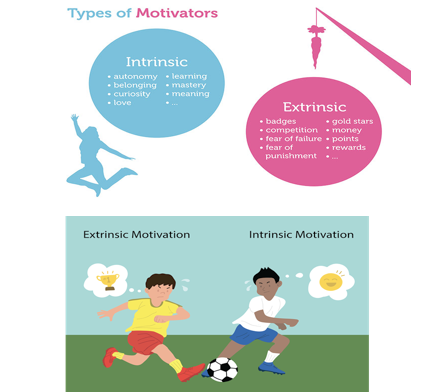 Motivated Behavior is typically driven by one of two forms of motivation.

( Both are derived from some type of incentive. )

Habituation is a decrease in response to a stimulus after repeated presentations. It is considered to be one of the simplest and most common forms of learning. Habituation allows people to tune out non-essential stimuli and focus on the things that really demand attention. If the habituation stimulus is not presented for a long enough period before a sudden reintroduction, the response will once again reappear at maximum strength.  This is something that happens regularly in your everyday life and it often goes unrecognized.
Posted by Morgan M. at 3:31 PM No comments: 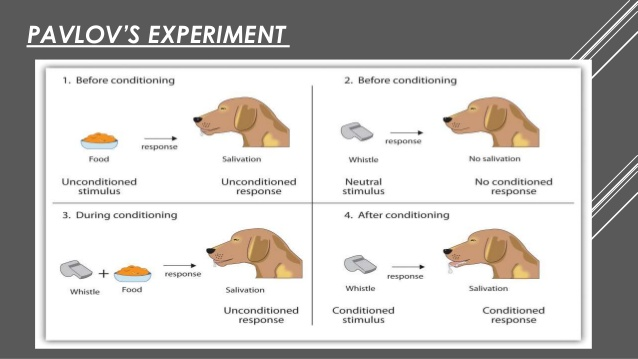 Negative reinforcement is a term described by B.F. Skinner in his theory of operant conditioning. He explains it as a response or behavior that is strengthened by stopping, removing, or avoiding a negative outcome or aversive stimulus.

Think of this reinforcement as something being subtracted from the situation.

Both escape and avoidance are types of negative reinforcement, both result in an increase of the behavior that terminated or avoided the aversive stimulus. Both create emotional responses that say, phew, thank god that is over.

This reinforcement is seen most effective when reinforcers are presented immediately following a behavior. When a long period elapses between the behavior and the reinforcer, the response is likely to be weaker.

For example, with animals the beep on the shock collar before the shock. The dog is now aware of what that noise means due to its conditioning history that the beep predicts pain if the current behavior continues.

Example of Negative reinforcement in the show Big Bang Theory: 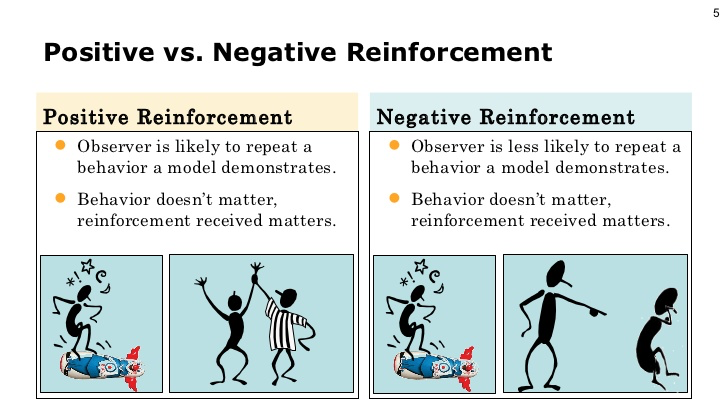 Self-Awareness and Differentiating Self From Others

There is a self-awareness test called mark and mirror task designed by Gordon Gallup, an animal behaviorist, and Beulah Amsterdam, a clinical child psychologist. This test was invented to understand the ability to see oneself as separate from others. Both researchers knew that young children and apes had a liking for mirrors, but were curious if they were using them for the same purpose.

We are not innately self-aware. Once we develop this state of mind we gain the ability to notice our traits, behaviors, and feelings. Changing our focus and applying our attention to ourselves. Allowing us to achieve differentiation so we can truly understand our experience and learn from situations in our environment with people we are connected to.

“Once you can become the object of your own attention, and you can begin to think about yourself, you can use your experience to infer comparable experiences in others.”

It is found that both humans and animals develop self recognition before the age of 3. 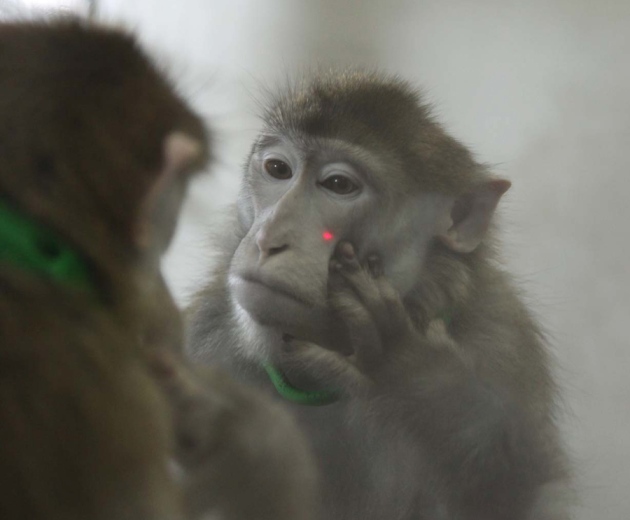 Labels: Self-awareness and differentiating self from others

While reading throughout this chapter it has helped me gain not only knowledge about Classical conditioning, but also all of the processes and practical applications that go along with it. One of the things that definitely stood out to me the most in this chapter is "Additional Factors in Phobic Conditioning." As stated on page 186, not all phobias are not always received through  a direct process of what is called classical conditioning. In fact, something that I had learned throughout this chapter that I thought was very interesting and something that I did not know was that many people who have phobias do not particularly recall any symptoms that are related to any classical conditioning as mentioned in this chapter. "Temperament is an individual's level of emotional reactivity, which is to a large extent genetically determined" (powell 187).  I personally believe that this means that when someone gets upset it's dependent on their level of emotions, how badly they react.

Posted by Megan Sweeney at 11:58 AM No comments: 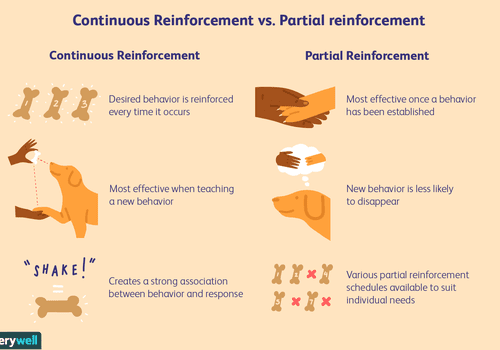