In psychological terms, extinction is referred to as the progressive weakening of a response that leads to a behavior to either decrease in occurrence or disappear entirely. In classical conditioning, if a conditioned stimulus appears independently, rather than in conjunction with an unconditioned stimulus, the conditioned response will soon pause (Cherry, 2019). This can be seen in Pavlov's dogs, in which they were conditioned to salivate at the sound of a chiming bell. Extinction appeared when the bell would chime and food was not given simultaneously, causing the dogs' salivation response to halt. 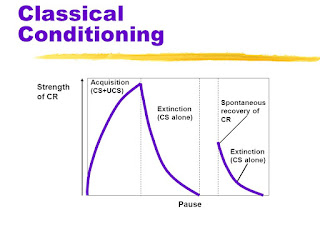 Operant conditioning occurs when an unconditioned stimulus with reinforcement are associated to alter a conditioned response. When looking at extinction in operant conditioning, it can be seen directly following a discriminative stimulus when response reinforcement stops (Cherry, 2019). For example, an individual associates the sound of a certain text tone with a message from a desired person, but upon repeatedly checking their phone given the tone and not seeing a message from that person, the individual stops checking their phone. 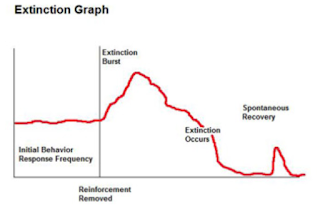 Posted by Jessica Sauer at 8:08 PM