Hello, My name is Hailey, and my first blog post is going to be about learned behavior.

Learned behavior is when we do something because we have seen it done before, or we pick up on a behavior that others do around us. This is a natural learning process, and we all have learned behaviors whether we realize it or not.

This is kind of an extreme example, but learned behavior makes me think of the Bobo doll experiment. In this experiment, from my understanding, there was a doll given out to different families or groups of people. Some of the families were told to love, care for, and protect this doll. While other families were told to be aggressive, hit and beat the doll. The point of the experiment was to see how the children would react, after seeing the families with the doll. The result was that the children did what they were shown. If their doll was protected, then they protected it, if their doll was hit, then they hit the doll.

This shows an example of learned behavior, the children got their behaviors from those around them. 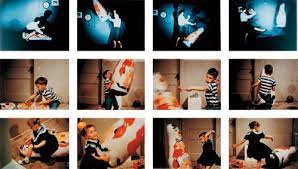