Classical conditioning involves a response over which the learners have no control over. Two stimuli's are linked together to produce a new learned response in a person. One example of a classical conditioning response can be from an abusive relationship. An abusive relationship can cause fear an individual, causing the abused person’s emotions and mind to start responding to some events involuntary. Just like a person developing PTSD from the war, a person in a previously violent relationship can also develop PTSD.  This can explain why an abused person jerks when someone yells at them or shows any sign of aggression, their response is fear. 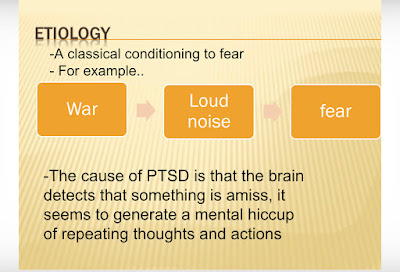 Posted by Bianca Mathieu at 2:29 PM