In psychology, there are many different types of research designs. Research is important, especially from a behavioral perspective, because in order to make conclusions about why certain behaviors happen or not happen, we need to be able to measure what is going on in the world around us. Additionally, it is important to determine which method and design of research is best for the study you are conducting and how it could affect the participant later on. The textbook mentions two broader categories of research which are descriptive and experimental research. This post will focus on certain aspects of experimental research. In experimental research, there are one or more independent variables that are manipulated in order to see how it affects a dependent variable. (Powell et al., 2015) Two types of single-subject designs which only focus on one or a few participants in experimental research are simple-comparison, and reversal designs. Each of these designs have their own unique strengths and weaknesses. Before diving into each of these designs, it is crucial to define what a baseline is. A baseline is the normal frequency of a certain behavior without any kind of manipulation. Baselines should last a brief period of time (ex. two weeks), not just for a day or two.

Starting off with the simple-comparison design, after the baseline of the behavior has been completed,  the treatment is implemented and the behavior pattern with the treatment is compared to the baseline. A real-life example of a simple-comparison design could be if a person wanted to cut down on how much they swear. First, the individual would have to take a baseline to see how much they swear on a normal basis.  This would include writing down on a piece of paper a tally every time they swore. After the baseline has been completed, the person decides to take a bite of a food they do not like every time they swear as a treatment for the behavior that is unwanted. The amount of swearing in the baseline and treatment periods are compared to see if eating an undesirable food inspired the person to swear less. One weakness of a simple-comparison design is that it does not look at whether there were other factors that could have been the reason for an improvement in behavior. (Powell et al., 2015) Also, the participant does not revert back to the baseline (no treatment) therefore we only get to see one trial of the treatment which is not enough to determine if it actually helped or not. In contrast, the reversal design does alternate between the baseline and the treatment periods. As a result, we have a better chance of being able to tell if the treatment is really causing the improvement in behavior. Personally, I believe that the reversal design is a better option when trying to conduct this type of experiment than a simple-comparison.

This illustration depicts a reversal design. The baseline and treatment periods are alternated and the differences in student performance are able to be observed clearer. 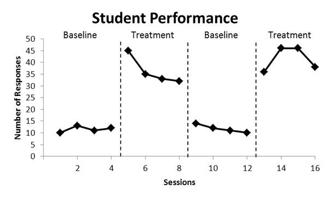