Chapter 14 talks about the psychology of perception and the study of our five senses. As described in the chapter, our senses seem to be a physiological function when in reality, they are much more than that. Our senses, and the way we perceive them are a psychological function and perception is “the mind’s link to external reality” (Hunt 505). Humans have had curiosities about perception since ancient Greek philosophers such as Plato and Democritus developed their own theories on visual perception. Some people, such as Bishop Berkeley have doubted the accuracy of our perception and propose that the world around us is actually different than how we perceive it. This is a strange way to think about perception, and most people have trust in the accuracy of our senses. Optical illusions however, are a little different. As described in the book, an example of an optical illusion such as the moon in the sky,  appears to be smaller than a coin. We are aware that the moon is not truly as small as it looks, but it still looks tiny from our point of view because of how far away it is. In this case, what we see is not actually what exists. Implications are that the study of perception can be related to gestalt psychology, as it pertains to how we naturally perceive things and how we can see a complete image, even if it is not complete or is degraded. A key concept is that our ability to do this is by relating the image to what we have seen in the past. This is schema driven, or top-down processing. An example of top-down processing is the image below. Although the “H” and the “A” are the exact same figure, we have previous knowledge of individual words, which allows us to clearly read this as “the cat”.

This chapter included various different examples of optical illusions. There are different categories of illusions, such as an image that is ambiguous and can be seen in two different ways. For many people, they are able to switch back and forth how they see an image and they have the choice in how they see the image. The image below is an example. 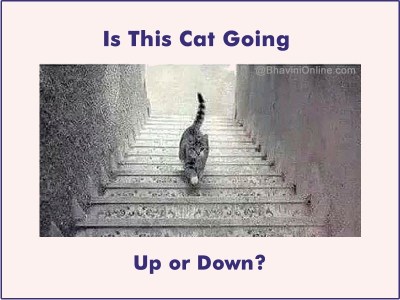 One of the most interesting parts of this chapter is the explanation for these illusions and why they occur, also how images of what we see reach our minds in the first place. In studies on people who have suffered brain damage such as a stroke, patients were able to explain certain traits about common objects like a banana, but were unable to name other traits about the object such as its color. As explained “mental images are not located like field pictures in any one or several places, but that the components of each image - its shape, its color, its texture, and so on - are filed away separately” (Hunt 513). An ongoing question, relating back to personality psychologists, is whether we are born with an innate sense of the world around us, or is everything we perceive learned as we experience the world?
Posted by Shannon Frankenfeld at 1:04 PM