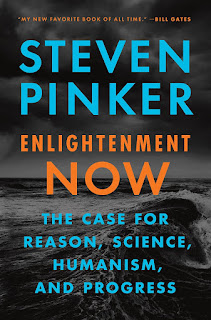 Introduction:
Enlightenment Now by Steven Pinker discussed various topics of public fears or opinions regarding the condition of the world. Pinker urges readers to acknowledge the facts that are often ignored in result of the overwhelming pessimism that is presented in today’s news, which suggest that life and the world as a whole are actually a lot more well off than we may belief. By discussing topics such as life, health, terrorism, and so on, Pinker introduces figures and data sets that show how the world has progressed over the last few decades in an attempt to battle the negativity that is accepted by society today.
Chapter 5: Life
In this chapter, Pinker discusses the astonishing progress that has taken place within life expectancy. When you compare life expectancy in the 18th century to now, the progress is undeniable. The following graph that Pinker introduced shows the incline in life expectancy from 1760 to today. 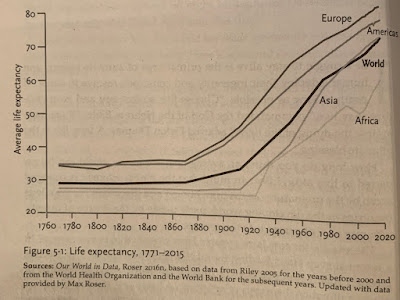 Even in the areas of Asia and Africa that are struggling with relatively slow life expectancies compared to Europe and the Americas, the growth of life expectancy rate has shot up twice the rate of Europe for Asia and one and a half times as much for Africa. This stretch in average life span is mainly the result of the decrease in infant and child mortality rates. 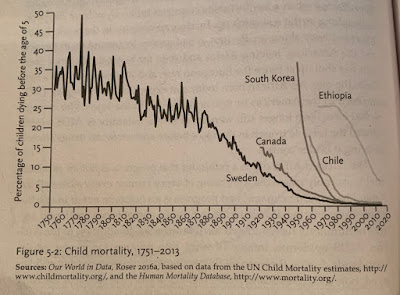 Pinker also discusses how long with living further into old age, people are becoming more able to avoid the risks of disease, injury, and wear in their later years. Scientists predict that the rate of life expectancy will only continue to rise as more medical advancements are discovered; however, Pinker acknowledges that this does not support the belief that humans will one day life to resist mortality. He explains that evolution and natural selection favor genes that make us vigorous in our youth over genes that make us live for as long as possible. In order for immortality to be a possibility, Pinker explains that biologists would have to reprogram thousands and thousands of genes and their respective molecular pathways, which even in itself has a small and uncertain effect on our longevity. Pinker sums up the chapter with the powerful quote from Davies’s Corollary: “things that can’t go on forever can go on much longer than you think.”
This chapter instilled a great sense of hopefulness in me for the years to come. A major fear of mine is death, and as we grow up year by year, we are reminded that life goes fast; however, this chapter reminded me that life is actually very long, much longer than the lives that have previously been lived. In fact, the lives of people my age today will most likely be longer than the people who have been warning about how life passes in the blink of an eye. It is very reassuring to know that as time goes on, the chance of living longer is increasing, providing great support for Pinker’s argument on the incredible progress humans have made today.
Chapter 6: Health
In this chapter, Steven Pinker discusses the topic of health within the U.S. and throughout the rest of the world. He introduces the chapter by discussing the historically largest cause of death, which was infectious disease. It would be interesting if Pinker would revise and republish this article in the future to include the current pandemic that will definitely make its mark in history and without a doubt affect this information to some extent, but regardless this chapter was very informative and effectively argued that the world is in a far better state of health than it is believed to be. In the past, Pinker explained, people used to treat disease with “prayer, sacrifice, bloodletting, cupping, toxin metals, homeopathy, and squeezing a hen to death against an infected body part.” With the invention of vaccination in the 18th century and the enforcement of the germ theory of diseases in the 19th century, the view on health began to increase in importance. Included in this chapter is a table of the different discoveries that have saved the largest amount of people worldwide. 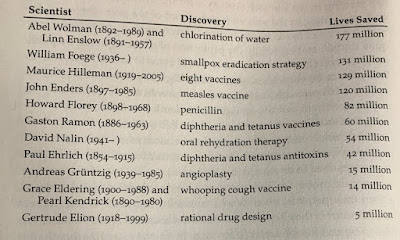 Majority of these discoveries are unknown to the general public but are astonishing in the amount of lives that have been saved. The most significant, and also probably the most overlooked, was the chlorination of water, which has saved over 177 million lives. Pinker also discusses the diseases who have not yet been eradicated, including Malaria, showing that this disease that in the past has killed around half of the people who have ever lived has fell in the number of cases by 60%. Related to health, Pinker ends the chapter by discussing aspects of science that have played a role in the improvement of global health, including the introduction of boiling and filtering water, washing hands, giving supplements to women during pregnancy, defecating in latrines rather than in streets or waterways, and so on.
This chapter was very personally eye-opening. The first time that I read this chapter was prior to the COVID-19 pandemic, and it allowed me to realize how better off we as humans are today health-wise compared to our ancestors form less than a hundred years ago. The most surprising piece of information that stuck with me would be that chlorination of water has saved more lives than any vaccine or cure that has yet been discovered. Something that the common person most often overlooks has saved millions of people and this is often taken for granted. Pinker’s discussion of how humans have progressed into better health overall was very interesting and allowed me to become more grateful for the seemly small yet incredibly important discoveries over the last few decades.
Chapter 13: Terrorism
In chapter thirteen, Pinker begins his discussion by acknowledging that the highly publicized terrorist attacks and rampage killings have caused the public to be on constant edge claiming that we live in “newly dangerous times.” He noted a study that found that in 2016, terrorism was named the most important issue facing America as a country. As a response to this, Pinker states that the fear and threat of terrorism is simply an illusion that serves as a distraction in our assessment of progress. A table is included of the number of deaths from terrorism, war, homicide, and accidents in the year 2015. 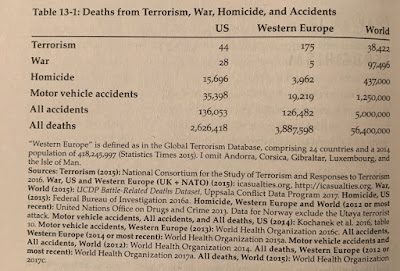 This table shows that in the United States terrorism resulted in only 44 deaths within the year, while car accidents caused 35,398. This means that as an American you were around 800 times more likely to die from a car crash than you were to die from an act of terrorism. Pinker enforces that the reason why terrorism causes such panic and hysteria regardless of the minuscule danger that it is compared to other risks is because that is what it is designed to do. Terrorism is used to gain the world’s attention by the killing of innocent people, whether it be for themselves to be known or for the recognition of a certain cause or group. Pinker ends the chapter by coming to the conclusion that fear of terrorism in our country is a not a sign of how dangerous our society has become, but instead of how safe because of the gained knowledge and analysis of how to keep numbers small with the correct systems that are now in place.
Pinker’s use of facts and data tables was what caused this chapter to be one of the most powerful and informative chapters in the entire book. Since living through the terrorist attack of 9/11, a general fear of possible forms of terrorism occurring again has been instilled in almost everyone in the country today. By pointing out the little threat that it holds compared to everyday things such as car accidents, Pinker is able to calm readers into believing that terrorism is not a sign of a lack of progress, and people today are still becoming more better off than those in the past.
Conclusion:
After finishing this book, I have become aware of the tremendous progress that our world has made as well as the reasons why this progress has taken place. The most enjoyable part about this book for me would have to be the strength behind all of Pinker’s arguments. I really appreciated how Pinker acknowledged both sides to every argument, making sure to discuss first why people may think that the world isn’t showing progress in all aspects that were discussed. The use of tables and graphs also played a huge role in enforcing the argument that the world as a whole has and will continue to progress. The only form of criticism I would have for the book as a whole would be Pinker’s lack of explanation on certain topics. While Pinker did thoroughly explain all of his own arguments, he did not always explain what the arguments of others that he included meant or referred to. This did not make the book any more difficult to read or any less enjoyable, but with a bit more explanation the added arguments could’ve been a slightly stronger asset for his writing. Overall, I would recommend this book to anyone who is turned off by the negativity of the news and needs a piece of information to show why everything isn’t as bad as it seems. Especially now as we live through a pandemic that will go down in history, Pinker’s informative yet still entertaining writing was the perfect escape that still made me fell informed about what was occurring within the world.
Posted by Carly Ruppert at 2:55 PM