Book Report- This Explains Everything

The book This Explains Everything by John Brockman includes an assortment of today’s most relevant ideas, as well as explanations for some of our common curiosities. Brockman is the creator of The Edge, which is an outlet for today’s most notable thinkers to present their theories and research. Brockman asked these thinkers to explain the deepest, most beautiful and simple theories on how our world works. The Edge includes a wide range of scientific fields including quantum physics, biology, social/behavioral science, and many more. Brockman received a variety of different responses on edge.org, which he edited and compiled into this book.

Of the many theories I read, there were a few that I especially enjoyed. One that I found interesting was “The Dark Matter of The Mind” by Joel Gold. In this section, Gold explains why humans are irrational beings and that some of our behaviors contradict our true desires. An example provided by Gold is that there are people who want a healthy marriage, and yet they still continue to cheat on their spouse. According to the theory, the root cause of our irrational tendencies lies within the unconscious mind. Freud was the first to develop the study of the unconscious and described it as an abstract realm which we are not aware of, dominated by irrationality. Although Freud’s beliefs about the unconscious are now seen as outlandish and untrue, the existence of the unconscious mind cannot be denied. The unconscious is the best way to explain why “presumably rational people live irrational lives” (Brockman 22). Although it is virtually inaccessible to us, the unconscious has the greatest influence on our behaviors. Like the universe, our minds mostly consist of dark matter. Scientists only have access to a tiny fractional portion of our universe, and yet the dark matter of the universe (the part that is invisible to us) has the strongest gravitational pull and has the greatest impact on our lives. Our conscious mind (aka things we are aware of) only slightly contributes to our day to day behavior. This idea can be compared to an iceberg. Although Freud did not create this analogy, it provides a visual understanding of this concept. Most of what makes up the whole iceberg is invisible to us (beneath the water’s surface). Similarly, the bulk of what makes up our personalities and behaviors is inaccessible to us. The unconscious is the mind's dark matter. 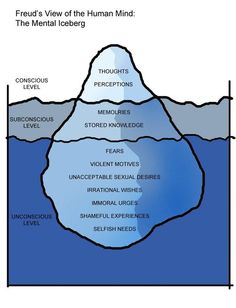 Another interesting section is called “Epigenetics-The Missing Link” by Helen Fisher. In this section, Fisher discussed the environment’s ability to affect gene expression by either suppressing them or activating them. The author explained this fascinating occurrence very simply. Basically, the environment can activate or turn on specific genes with a mechanism involving methyl molecule groups, but it can also deactivate genes with a different mechanism involving molecules called acetyl groups. Many factors of our everyday life can impact the way our genes are expressed. From a psychological perspective, one’s environment, such as how they are parented, their culture, their geographic location, and their education all have an impact on how genes are expressed. Those in the field of psychology would agree that childhood experiences play a role in the formation of our individual attitudes and tendencies. Epigenetic research explains the chemical changes that occur in the genes as children develop. A simple example can be seen in rats. As described by Fisher, a baby rat that gets regularly groomed by an attentive mother will grow into a resilient and relaxed adult rat. However, for a baby rat who is neglected by their mother, they are likely to become a less well adjusted, anxious adult rat. 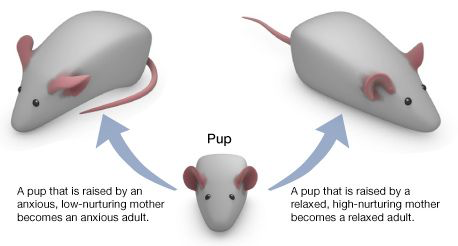 As Fisher explains, the formation of behavior through childhood experiences is more than just the idea that “the brain integrates and remembers these occurrences” (Brockman 180). Depending on environmental factors, either of the epigenetic mechanisms (methyl or acetyl molecules) are triggered, which will either suppress gene expression or activate it. Interestingly, if certain chemicals are injected into an adult rats’ brain, they can alter epigenetic processes and will change gene expression. Chemicals that enhance an expression of a specific gene can change an anxious rat (one that was neglected from birth) into a more relaxed rat. A simpler explanation is that, “Genes hold the instructions; epigenetic factors direct how those instructions are carried out” (Brockman 181).


Lastly, I was very interested in “One Coincidence; Two Déjà vus” by Douglas Coupland. This was a shorter discussion about an unexplainable phenomenon that happens to everyone: Déjà vu, which is a feeling one gets that they have already experienced the present situation. I liked when Coupland wrote “The underlying biodynamics of Déjà vu is probably ascribable to some sort of tingling neurons in a certain part of the brain, yet this doesn’t tell us why they exist” (Brockman 288). What he means by this is that there is some scientific explanation as to how Déjà vu occurs, but it still does not explain why these uncanny coincidences occur to us in a pattern throughout our lives. Another interesting idea that Coupland pointed out that I have never noticed is that Déjà vu occurs in to us a pattern, just about once every six months. There is no explanation as to why this happens but Coupland assures us that these coincidences are meaningful, and are otherwise known as synchronicity (a term coined by Carl Jung). I agree with Coupland and believe that Déjà vu is a “signal from a larger point of view that wants to remind us that our lives are distinct, that they have meaning, and that they occur throughout a span of time” (Brockman 288). Even if there is truly no significant meaning behind  Déjà vu, it is a distinctive experience that we can all relate to. 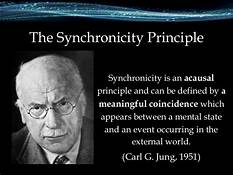 Overall, this book was an interesting read. Many of the topics covered were ones that I have been curious about, but never researched or looked into. Some topics were uninteresting to me or hard to understand, but the best part about this book was that I was able to move on to the next section and forget about the ones that confused me to no end. Almost anyone can relate to some ideas that can be found in this book, no matter who you are and what you are interested in. I like that this book includes a wide range of perspectives answering the same question which is: “What is the most deep, beautiful, and elegant theory of how the world works?”. There were quite a few that resonated with me and I learned a lot from. I would recommend this book to anyone who is interested in finding out more about the mysteries of our world, explained by the greatest thinkers of our time.

Posted by Shannon Frankenfeld at 5:53 PM