The book I chose to read for this semester is “Optimism Bias - A Tour of the Irrationally Positive Brain” by Tali Sharot. What first intrigued me to read this book was the great reviews but also the summary on the back of the book that says psychologists have known for a long time that people maintain an irrationally positive outlook on life. I would like to think of myself as a generally optimistic person so I wanted to read this book to discover why exactly I may be so positive about certain aspects of life. After reading the first chapter I already loved the book and couldn’t wait to continue reading. Sharot does a great job of using real life examples and research to explain some of her findings. I also found that the research evidence was easy to understand and often time relatable which I found helpful when trying to understand why the brain is so optimistic. I look forward to reading some other books written by Tali Sharot and hope they are good as “The Optimism Bias”!

Chapter Three - Is Optimist a Self-Fulfilling Prophecy?
To start I really enjoyed reading chapter three which dealt with whether or not optimism is a self-fulfilling prophecy. The main example used in this chapter is how the Los Angeles Lakers’ won the NBA championship two years in a row because the head coach guaranteed the win to reporters the next season. Sharot explained the coaches guarantee of a repeated win was an example of a self fulfilling prophecy. With the team believing that his goal was attainable and very likely led to hard work to achieve the win of the next season. I found it very interesting when Sharot wrote in this chapter that “A prediction has an influence on the event it predicts because people's behavior is determined by their subjective perception of reality rather than by objective reality.” This was important information when later in the chapter Sharot talked about stereotypes. While the self fulfilling prophecy can lead to achieving a goal it can also lead to fulfilling negative stereotypes. The author uses the famous Jane Elliot experiment to explain the self fulfilling prophecy of stereotypes. Students who were told they were stupid began to act stupid and students who were told they were smart acted smart. I found this chapter to be one of the most important ones because it shows how the self fulfilling prophecy can be used in positive and negative ways.

https://www.youtube.com/watch?v=1mcCLm_LwpE - A Class Divided, Frontline
This is a link to the famous self-fulfilling prophecy experiment done by Jane Elliot. This documentary demonstrates how easily it is for people to fulfill stereotypes placed on them.

Chapter Five - Can You Predict What Will Make You Happy?
Another chapter I really enjoyed, as did most people in my group, was chapter five on whether or not we can predict what will make us happy. I was most excited to read this chapter because of the many stereotypes that money is the most important thing that will make us happy. I was blown away to find that studies have shown that any correlation between having kids and happiness was a negative one. I was even more surprised to find that satisfaction with life increases once children grow up and leave the house they were raised in. Sharot explains that although many believe raising children will bring them happiness is it more based on the biological urge imprinted on us to pass on our genes. As I continued to read I still wondered what exactly it is that makes us happy. In the conclusion of the chapter I found that it is the belief that happiness is around the corner that keeps people so happy and optimistic. When looking at the brain scans of people explaining their optimistic futures there was greater activity in the rostral anterior cingulate cortex area. This area of the brain also deals with the difference between depressed and healthy individuals. In a depressed patient the rACC fails to adequately regulate the amygdala which would make these individuals more pessimistic than healthy individuals. This study shows that having optimism bias is an important part of what keeps us happy. Being positive about the future is ultimately what is making us happy in the end. 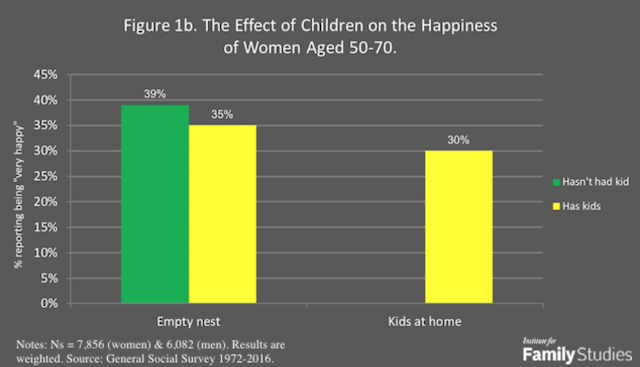 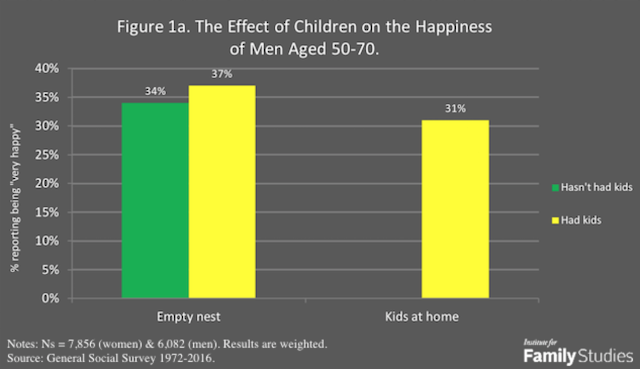 Charts from Institution For Family Studies, Does Having Children Make People Happier in the Long Run? - Nicholas H Wolfinger

Chapter Six - Crocuses Popping Up Through The Snow?
The last chapter that I want to mention is chapter six which dealt with depression, interpretation and genes. I found this to be one of the most informative chapters because it deals with the common misconceptions of antidepressants. I found it very important that Sharot explains that antidepressants change the way someone thinks and how they process and interpret the world around them. I think many people will commonly perceive antidepressants to be a mood booster but they lack to realize that these drugs change how people with depression view the world. Antidepressants like SSRIs change cognitive biases towards the world. I found it interesting to learn that people with a propensity for depression tend to be biased toward negative stimuli. This is informative information to people who don’t understand why someone with depression can’t just see the positive things around them. Another aspect talked about in this chapter is the serotonin transporter gene has alleles that come in a long or short version. Individuals with the short version of the allele have less effective serotonin transporter functions and are more likely to suffer from depression if they experience a stressful life event. I found it interesting that the shorter allele makes a person less resistant to stressors and more difficult to overcome difficult life events. On the contrary studies have also shown that individuals with the long version of the allele tend to be more optimistic. This positive bias was not detected in individuals with the short version of the allele. The main thing I took away from this chapter was how whether or not we are biased is partially determined by our genes among other factors.

https://psycheducation.org/depression-is-not-a-moral-weakness/chapter-4-connecting-anxiety-and-depression-via-the-serotonin-transporter-gene/ - Connecting Anxiety and Depression via the Serotonin Transporter Gene, Psych Education
This article goes more in depth on the difference between the serotonin transporter gene that has alleles that come in a long or short versions. It also touches on how exactly the difference in allele size can determine aspects about depression and anxiety in a person.

Overall I enjoyed all the chapters of this book. Sharot touches on many different aspects of optimism bias and explains the functions of many different areas of the brain. This is a book that you do not need prior knowledge on neurobiology because the author explains it all within her chapters. I would especially recommend this book to anyone who tends to have a more pessimistic view on life. I think that this book is helpful to all kinds of people in explaining why they may think in a more positive or negative way. I am glad that I got a chance to read this book and I look forward to reading some more books written by Tali Sharot.
Posted by Hanna Wilson at 7:31 AM