I chose to write my journal post on chapter fourteen because it goes into depth on perception and some of the many questions associated with seeing. The chapter starts off with some history on the psychology of perception and then addresses some of the many questions that have been around for centuries about sight and perception. Reading the chapter I found that some of the most important information came from the sections on the two ways of looking at vision.
One point of view is the neural approach which covers how sensory nerves transmit sensations to the brain and how the brain turns those incoming impulses into vision. These types of physiological based questions were all researched by the nineteenth century psychologists. Through the years of researching psychologists found that the receptors that respond to specific stimuli send their messages separately to the striate or primary area of the visual cortex. This concept starts with the retina where rods are sensitive to low levels of illumination and cones are responsive to different wavelengths of visible light. From here the brain puts it all together using the primary visual cortex which integrates impulses and blends the information from the two eyes. The striate region then sends the information to higher areas of the brain and the information is then seen and recognized by the mind. The principles of the neural approach tell us about the working of visual perception on a micro level. The neural approach fails to recognize the point of view on the experiencing perception.
The other perspective is the cognitive approach which deals more with the mental processes of perception. The mental processes of visual perception are organized mass effects of neural phenomena expressed by mental laws. Many of the models of perception have to do with higher mental processes and recognizing symbols of the external world. Researchers have been trying to formulate a cognitive theory on how these processes work and what that looks like. What they have concluded is that perception involves a higher level of the brain and a lot of problem solving. Trying to decide if what we are perceiving is real or true requires a lot of energy and mental thinking. This is why the cognitive approach is grounded in mental processes.
Over the centuries psychologists have come to many conclusions on perception but a great deal still remains unknown. After reading this chapter of Hunt’s book I found the neural and cognitive approaches to perceptions to answer many questions. But after reading I also still question the process of perception and wonder if what I am seeing is actually real or just something interpreted by my mental process. Overall the author gives a good logical explanation of perception. 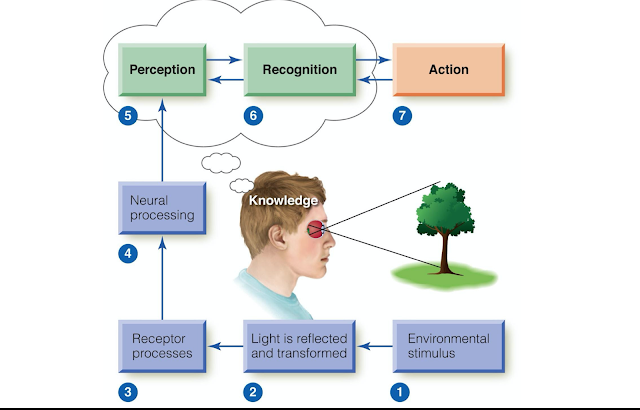