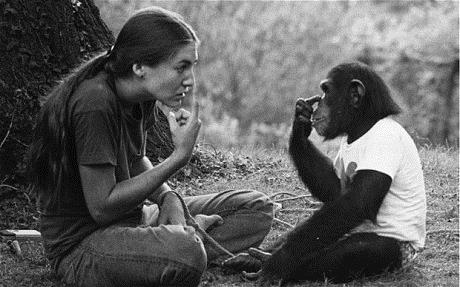 In the book, the authors discussed how sign language was used to teach chimpanzees American Sign Language. The authors discussed how in the wild, chimpanzees already communicate by using gestures, such as pointing or arm waving. In order for the experiment to be conducted, the researchers decided that it was best to raise the chimpanzees in a family group in order to teach them through day-to-day activities. Researchers discovered that the best way to teach the chimps sign language was through molding, “which involves placing the ape’s hands in the correct signing position and associating that position with the object being ‘talked’ about,” (Powell, et al., p. 523).

There were various studies that were conducted on both chimpanzees and apes. A chimpanzee named Nim Chimpsky was part of a study by Columbia University. With Project Nim, the chimp lived with his surrogate mother Stephanie LaFarge in New York. He lived with LaFarge’s family for the first two years of his life. Once the project stopped receiving funding, Nim was sold to a medical lab where he was in a tuberculosis study. The researchers concluded that Nim did learn signs, but it was inconclusive as to whether he actually was learning the language because he never signed spontaneously.

It was interesting that research was put into teaching sign language to chimpanzees. It was interesting that the researchers had to give up their lives to basically raise the chimps like their own children. They also had to become fluent in ASL themselves. Even though the researchers dedicated years into the experiment, there was no definitive way to assess the chimps' usage of language. The researchers wanted to break the barrier of language between animals and humans, but it was not entirely successful.