According to the American Psychiatry Association (n.d), Obsessive Compulsive Disorder (OCD) is a disorder in which people have recurring, unwanted thoughts, ideas or sensations (obsessions) that make them feel driven to do something repetitively (compulsions). The most common obsession is germs, and the most common compulsion is excessive handwashing or showering. These obsessions and compulsions interrupt an individuals daily life, because they cannot continue with their day if they cannot reduce their anxiety. "Obsessions are associated with an increase in anxiety, whereas compulsions are associated with a decrease in anxiety," ((Powell et al., 2017, pg. 343). OCD typically appears at the age of nineteen, and is most commonly found in females, but OCD has been reported males as well.
Obsessive Compulsive Disorder is one of the harder disorders to treat in individuals. However, treatment methods that have been found most successful include Exposure and Response Prevention (ERP) or Cognitive Behavioral Therapy (CBT) and medications that include Serotonin Reuptake Inhibitors (SSRIs). ERP and CBT involve exposing patients to their fear or obsession and having them not partake in their compulsion to relieve their anxiety. Over time the patient can be in contact with their obsession, and not follow up with their compulsion because they learn nothing is harming them. Additionally, SSRIs help to calm the patient with OCD, and eventually their obsessions and compulsions will dwindle. 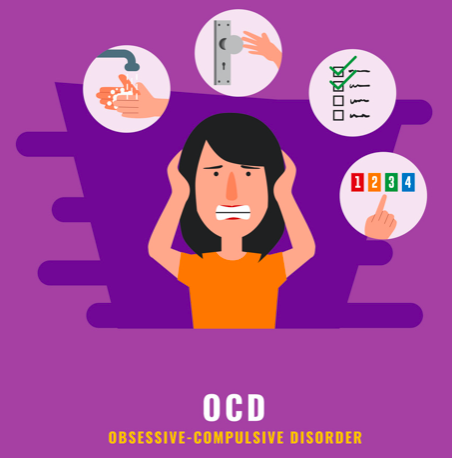 Posted by Hannah Crudo-Goodson at 3:26 PM