I was always very intrigued by operant conditioning, so when I saw that there I was going to learn the history it fascinated me to read more about it. Operant conditioning is how humans and animals behave to obtain a reward. For example, when I was younger I would scream and run away when I needed to get shots but my dad would tell me if I sat there quietly he would buy me donuts. Now when I go get shots I am not afraid of it. Edward Thorndike was interested in animals' intelligence, and how some animals run away from home and end up coming and finding their way back home. To him, it seemed to be that the animals knew automatically where to go back but they really did not.

He started off by breaking down the behaviors that the animals represented to figure out how they were capable of doing this. He did an experiment with cats and designed a puzzle box for them. The box contained a lever and a pedal for the cat to push on. This puzzle was for the cat to be able to open the door and then be rewarded with food. After spending copious amounts of hours with these cats he discovered that they learned how to escape from trial and error. Then called this the Law of Effect. I wonder now since these tests have been done on these animals if they grew an instinct of knowing how to do these things. 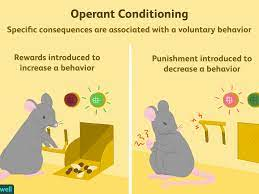 Posted by Melissa Bardales at 5:48 PM