It is important to see punishment in terms of both positive and negative, depending on how it is applied. A person's use of punishment may be traced back to the time of their parents. Punishment is described in the book introduction to learning and behavior as the delivery of an unpleasant stimulus or the removal of an appetitive stimulus in order to weaken a behavior. As a result of these fundamental differences, the book also discusses penalties in terms of positive and negative consequences. In the case of negative punishment, an event is removed as punishment for an action, which reduces the power of the reaction in the future. People are less inclined to act in such a reckless manner because their actions result in the loss of what they value. Positive punishment, on the other hand, is the addition of anything to the mix that will result in an unpleasant outcome. The objective is to reduce the possibility that the undesirable conduct will occur again in the future. For example, when a child neglects their responsibilities, a parent will add extra chores to the list. 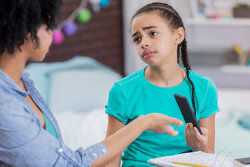 Posted by Rachel Jennings at 12:13 PM