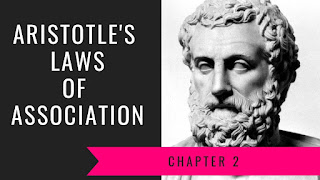 Greek Philosopher, Aristotle, believed that ideas are made by connecting an event to a person, place or idea, in order to remember something. He also suggested that associating objects with people, or places will also help someone remember or learn about something. In order to prove his theory, he came up with four laws of association. These four laws of association consisted of The Law of Similarity, The Law of Contrast, The Law of Contiguity, and The Law of Frequency. The Law of Similarity is just grouping situations together based on how closely related they are. The Law of Contrast states that things that are polar opposite of one another, tend to be associated back to one idea. The Law of Contiguity states that events that are happening relatively close to one another (in time or in space) are also associated with one another. And the last law, The Law of Frequency means that the more an event occurs (at least two or more times), the more they will be associated with one another.