So in simpler terms, extinction results in the conditioned behavior eventually stopping. An example of this behavior is when you teach your dog a trick, like "shake". Over time, the trick becomes less interesting to the dog. You stop asking your dog to "shake" and the reward stops as well. Eventually, the behavior will go away and the dog will not "shake". Extinction happens in many aspects of life in humans and animals.

In classical conditioning, the behavior stops when the conditioned and unconditioned stimulus are not paired. 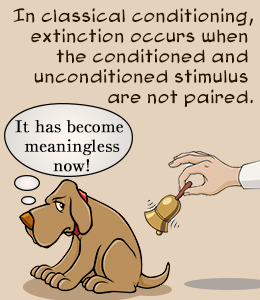 Posted by Alyssa Torres at 3:59 PM