According to the book the two process theory of avoidance, two processes are involved in learning an avoided response. The first process is classical conditioning of a fear response to a CS. In accordance to this theory my cat Maui, will avoid any child that comes into my house. When I had first adopted Maui I use to babysit my god daughter often, and she loved Maui, although Maui didn't enjoy her company so much. She would toss him around like he was a rag doll, and Maui being the passive kitty he is allowed it but now, no matter what child comes to my house he runs away from them. Even though some of the kids are scared of him for whatever reason he still runs, and hides under my bed where he knows he can't be reached. Like the example given in the book of the dogs jumping over a barrier to avoid a shock every time, even after the shock was turned off. The kids are the shock in Maui's case, and he will run away from them, every single time. This is Maui: 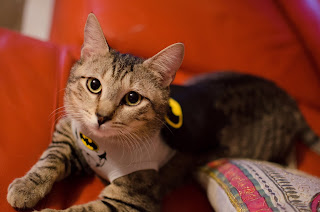