Positive reinforcement consists of behavior results in the delivery of something that the recipient likes. Reinforcement is a procedure that strengthens a behavior, and punishment is a procedure that weakens a punishment. We learned in chapter 6 that there are two main types of consequences in operant conditioning: reinforces and punishers. When dealing with training an animal for an example, if the response is followed by a reinforce, then it would be considered that means that a contingency of reinforcement exists. This means that the delivery of the reinforce is contingent upon response. If in the situation the response is followed by a punisher, then a contingency of punishment exists. Reinforcement and punishment are further divided into two punishments positive and negative. Positive reinforcement consists of a presentation of a stimuli’s. Negative reinforcement would be the opposite, removal of the stimulus.
There will be a time in everyone’s life that they will be dealing with positive and negative reinforcement, it can be with a child or even training an animal. 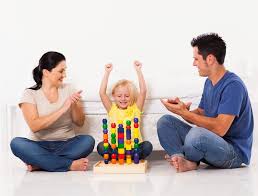 Posited below is video of an episode of The Big Bang Theory and they are using positive reinforcement in a joking manor. 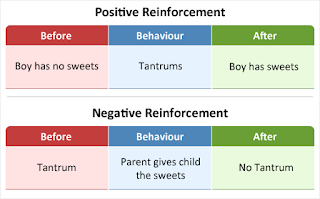 Posted by Gabby Savatteri at 5:26 AM