In chapter 2 of Introduction to Learning and Behavior by Honey, Powell, and Symbaluk (2013) we learned about the differences between deprivation and satiation. Deprivation is described as “the prolonged absence of an event that tends to increase the appetitiveness of that event” and almost opposite from deprivation is satiation, which is defined as “the prolonged exposure to (or consumption of) an event that tends to decrease the appetitiveness of that event” (Honey, Powell, & Symbaluk, 2013, p. 559 &564). When first reading about deprivation I immediately began to think of dieting. Whether depriving yourself of soda, candy, fast food, carbohydrates, or food in general, when dieting we are usually depriving our body of what certain things we really want. Deprivation isn’t always necessarily bad, but if you’ve ever been on a diet or have seen someone on a diet it always seems that the thing that the dieter is depriving oneself of the most, is the thing you cannot stop thinking about.
Beth Cecil, a dietitian at Owensboro Health explained in an article Donuts in your cart the drawbacks of excessive deprivation during dieting. Cecil asked readers to answer a few questions: 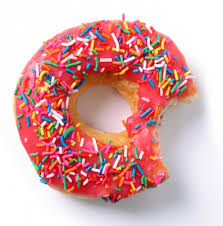 Cecil explained that if you say yes to a majority of these questions, then it is very possible that you are depriving yourself of food, and will therefore crave the item more and will have a greater risk of binging on it later (Cecil, 2015). Personally, for the past few years my family and I have been strictly counting our calories through App’s on our phones. When I first started I really struggled with not being able to have ANY of the “unhealthy” or high calorie foods that I love. Unfortunately, it seemed that when I allowed myself to give in and have the item I was craving I would eat an excessive amount (even more than I would have eaten before calorie counting). I was able to change my complete deprivation of certain foods from a strict deprivation to a small, manageable amount when I was really craving it.
This got me thinking... what is a better reinforcer, deprivation or satiation. I found a 1986 article called Deprivation and satiation: the interrelations between food and wheel running by Boar, Epling, and Pierce. Boar, Epling, and Pierce explained that in this 1986 study  they were testing “two experiments designed to assess whether depriving rats of food would increase the reinforcement effectiveness of wheel running (Experiment 1) and whether running would decrease the reinforcing effectiveness of food (Experiment 2) (Boar, Epling, & Pierce, 1989, p. 199). A brief understanding of the results of the experiments were described by Boar, Epling, and Pierce in  Deprivation and satiation: the interrelations between food (1986) as “these experiments suggest that food deprivation increases the reinforcing effectiveness of wheel running. Also, satiation, by spontaneous or forced activity in a running wheel, decreases the effectiveness of food reinforcement. Thus, the two experiments suggest that deprivation-satiation operations with respect to one event alter the reinforcement effectiveness exerted by another event” (Boar, Epling, & Pierce, 1986, p. 208).

FINALLY
For those of you who have seen Parent Trap with Lindsay Lohan (x2) here is a really interesting way to look at Deprivation vs. Satiation with the “absence” vs. “exposure” being a person.
Parent Trap Satiation vs Deprivation: www.youtube.com/watch?v=ws1go7S52v0


References
Cecil, B. (2015). Donuts in your cart. Retrieved from
http://www.owensborohealth.org/patients-visitors/locations/healthpark/programs/nutrition-and-weight-management/eating-well/food-deprivation-backfire/