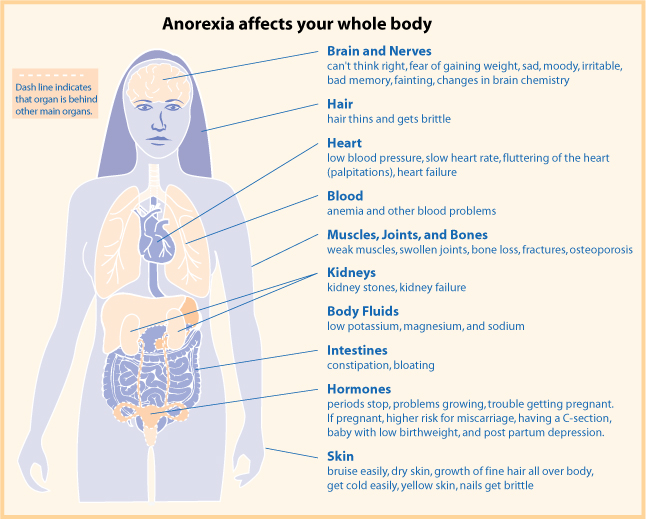 An extremely interesting concept that caught my eye while looking through our book Introduction to learning and behavior by Honey, Powell, and Symbaluk was the concept called activity anorexia. This concept was defined by Honey, Powell, and Symbaluk as “an abnormally high level of activity and low level of food intake generated by exposure to a restricted schedule of feeding (493). The authors describe the effects of activity anorexia with the use of rats by explaining that if a rat has access to food for 1.5 hours each day and access to wheel running for 22.5 hours the rat will increase their amount of running time during the wheel running interval time. Also, the authors noted that “the more they run, the less they eat, and the less they eat, the more they run” (Honey, Powell, & Symbaluk, 2013, p. 492). Surprisingly, if the experiment is not terminated after about a week, the rats will actually emancipate themselves and die.
The scary effects of activity anorexia was compared to anorexia nervosa in humans. The rats are purposely put into the specific situation that causes activity anorexia, but why do humans put themselves into a situation that causes anorexia nervosa? The Office of Women’s Health of the U.S. Department of Health and Human Services explained in their 2012 article called Anorexia Nervosa Facts Sheet that “there is no single known cause of anorexia (“Anorexia Nervosa Facts Sheet, 2012, p. 2). This article explained 5 potential things that could play a part in the onset of anorexia nervosa as:

The National Eating Disorders Association (NEDA) explained surprising statistics on eating disorders and the desire to be thin in their article Get the Facts on Eating Disorders (2014). The NEDA explained that:
An extremely interesting part of both activity anorexia and anorexia nervosa were the effects it have on both the female rat and female human population. Introduction to Learning and Behaviors by Honey, Powell, and Symbaluk explained that “evolutionary pressures may also contribute to the increased incidence in anorexia in women. When placed on a calorie restricted diet, female rats demonstrate increases in both activity level and learning ability more so than male rats, which may represent an evolutionary-based tendency that enables females to compete efficiently for resources in times of food scarcity. This is in relation to a statistic explained by The Office of Women’s Health of the U.S. Department of Health and Human Services explained in their 2012 article called Anorexia Nervosa Facts Sheet in which they stated that “85 - 95 percent of anorexics are female” (“Anorexia Nervosa Facts Sheet, 2012, p. 2).

References:
Anorexia Nervosa Facts Sheet. (2012). Office of Women’s Health of the U.S. Department of
Health and Human Services. 1-3. Retrieved from:
http://womenshealth.gov/publications/our-publications/fact-sheet/anorexia-nervosa.html
Get Facts on Eating Disorders. (2014). The National Eating Disorders Association. 1-4.
Retrieved from: https://www.nationaleatingdisorders.org/get-facts-eating-disorders.
Posted by Unknown at 7:42 AM