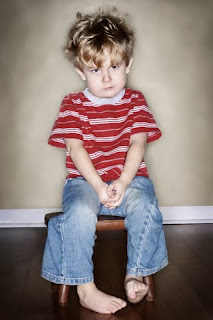 Negative punishment consists of the removal of a certain event following a response, which then leads to a decrease in the future strength of that response. A loss of employment for being obnoxious and a loss of dessert for complaining at the dinner table are both examples of negative punishment. There are two types of negative punishment: time out and response cost. Time out involves the lossof access to positive reinforces for a brief period of time following the occurence of a problem behavior. Time out has become popular with modern-day parents, who frequently attempt to punish a child's misbehavior by sending them to the bedroom or making them stand in a corner for several minutes. I am in favor of time out as a negative punishment because it really makes a child upset that they are taken away from an activity that gave them enjoyment.
Posted by Jasmin Brown at 8:02 PM