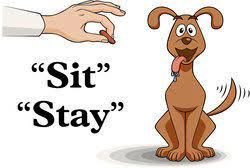 As I studied this theory, I was able to compare it to the way that I had trained my German Shepherd dog back at home. In order to teach him different commands, like raising his paw, I would reward him. Whenever he would raise his paw, he would be rewarded with treats in order to form an association to help him learn the command. This type of conditioning is effective and I can say that from first-hand knowledge.